A few times a year, I work with a non-profit organization—Live It Learn It—to give Capitol tours to 5th graders from some of DC’s most under-served public schools. Those are days I always look forward to for the obvious reason that the kids are not only bright and respectful, but they’re totally adorable. Another entertaining aspect of these tours is trying to anticipate what questions the kids will ask me because, as anyone who has spent time with 5th graders knows, they can ask a lot of very specific questions about very random things. Without fail I will get a new question during each tour, usually about an obscure part of a painting or sculpture in the Capitol somewhere and, of course, it’s always something I know nothing about. So, after each tour, I find myself back at my desk, looking up the answers to these many queries.

I decided to share with you two of the pieces I get asked about very often by the 5th grade students on these tours. They are located in National Statuary Hall (the Old House Chamber), and they are two that I had seen many times, but not paid too much attention to: the “Car of History Clock,” and the “Liberty and the Eagle” sculpture. The questions usually entail one of the students pointing to one or the other statue and saying, “Who is she?” Or, “what’s that snake mean?” Not knowing any of the answers, I took to the Architect of the Capitol’s website to find out, and here is what I found:

This piece of sculpture sits above where one enters Statuary Hall from the Rotunda. It is a marble sculpture of Clio, the muse of History, standing in a winged chariot, which sits atop a marble globe that has the signs of the Zodiac engraved on it, with the face of the clock as the chariot’s wheel. 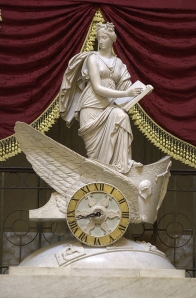 The “Car of History Clock,” as displayed in National Statuary Hall, Carlo Franzoni, 1819 (Architect of the Capitol)

In her hand, Clio is holding a book within which, it is said, she was recording the unfolding events in the House. On the other hand, the chariot depicts the passage of time. The sculpture of Clio in the chariot was done in 1819, by Carlo Franzoni, thereby making it one of the oldest works in the Capitol. The clock was installed in 1837 and was done by Simon Willard. And no, the clock doesn’t work anymore.

Liberty and the Eagle Sculpture

This plaster sculpture depicts Liberty—as with Freedom, Liberty is personified by a female figure—with an American bald eagle to her right and a serpent coiled around part of a column to her left. The serpent is apparently a sign of wisdom, although that’s not usually what I think of when I encounter a snake. In her outstretched hand, Liberty holds a rolled up copy of the Constitution. 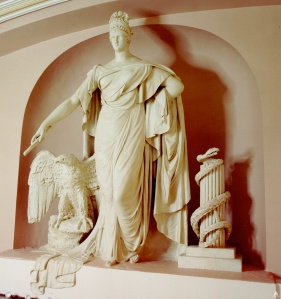 The piece is above where the Speaker’s desk used to be when the House met in Statuary Hall, and is now above the area where members of the House and others walk through to enter the current House chamber. The sculpture was done by an artist named Enrico Causici and placed in the Old House Chamber between 1817 and 1819, also making it one of the oldest pieces in the Capitol.

From 1807 to 1857, the House met in an echo-riddled but beautiful chamber called the Hall of the House. When a major Capitol expansion project began in 1850, House members were delighted by the prospect of moving to a room with better acoustics. Once the move was made, however, questions continued to reverberate in the Hall–what to do with an august but empty large room?

Various proposals surfaced over the years, but Congress eventually settled on “art gallery” as the answer. The space had already hosted displays of art when, in 1864, Congress passed an act allowing each state to donate two statues of prominent (deceased) state residents to the Capitol–for display in the Old Hall of the House. The change in purpose brought a change in the room’s name; because Congress intended to house a national collection of statuary there, it was renamed National Statuary Hall.

In 1933, Congress had to authorize the extension of the collection’s display throughout the Capitol–National Statuary Hall had become far too crowded, which also raised concerns about the weight of all that marble and bronze. Now pieces from the collection appear in the Hall, in the Capitol Visitor Center, and elsewhere in the Capitol.

The history of this space actually includes two rooms: the first, designed by Henry Latrobe, was burned in 1814 when the British came to Washington near the end of the War of 1812. Latrobe and Charles Bullfinch rebuilt the chamber as they rebuilt finished sections of the burned Capitol and added previously unfinished portions. The chamber to which the House moved in 1857 is the one it currently occupies. You’ve seen it on TV, and not just on C-SPAN: the president delivers the State of the Union in the House Chamber.

Some of the most momentous debates in US history occurred in the Old Hall, as the young nation confronted the realities of part slave/part free country. Several future (and past) presidents served in the Hall, included Abraham Lincoln (1847-49) and John Quincy Adams, who was elected in 1830 after his time as president and suffered a fatal stroke while at his desk in the chamber.

Today, the ornate space is one of the main stops on a Capitol tour. If you have the chance to take the tour, be sure to ask your guide about the “whisper spot.” All kinds of (not necessarily true) stories abound about this acoustic trick, by which a person standing near one side of the room can hear a whisperer near the other side of the room. While the stories about eavesdropping may not be true, the actual phenomenon is–don’t miss your chance for a demonstration!

Take a second to look around National Statuary Hall during your Capitol tour, and you may see a sea of 35 unfamiliar faces. Pieces from the National Statuary Hall Collection, a display that features 100 statues—two from each state—can be seen in every corner of the Capitol building, but it’s in National Statuary Hall (or the Old House Chamber) that the oldest, and often most obscure, works can be found. States choose the subjects of their statues, the only requirement being that the person featured is deceased. When the collection was created in 1864, equal representation of women and minorities was not an issue in the foreground of those selecting subjects for statues.

One woman did make the cut, however. Frances Willard, the only female statue to be displayed in National Statuary Hall and the first woman included in the collection, was an educational reformer and a powerful force for social change, but the chances you’ve ever heard her name are slim. She is, however, frequently called the mother of grassroots organizing, and was instrumental in the passage of the 18th Amendment in 1919, ushering in the era of prohibition. 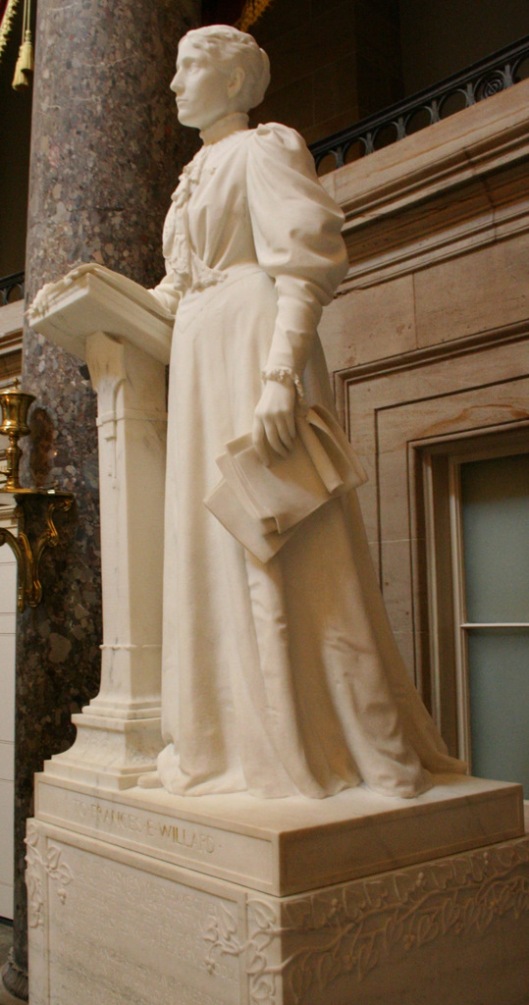 Willard began her career in women’s education. Born on September 28, 1839 in New York, she eventually settled in Illinois. She attended the Female College of Milwaukee for one year, but finished her degree at the Woman’s College of Northwestern University in Evanston, Illinois. Following her career as a student, she taught at the Genesee Wesleyan Seminary from 1866-1867. She returned to Evanston to serve as president of the College for Women from 1871-1874.

In the decades to come, Willard would gain a reputation as a powerful force for social change. She became involved in the evangelist movement of the era and was eventually elected president of the National Women’s Temperance Union in 1879, the driving force behind the temperance movement. In 1882, she organized the Prohibition Party and was elected president of the National Council of Women. In 1883, she founded and presided over the Women’s Christian Temperance Union.

While Willard did not live to see Prohibition—she passed away on February 18, 1898—her work, her passion, was instrumental in the passage of the 18th amendment. Alcohol was outlawed (although made legal again in 1933) in the United States because of the strength of the temperance movement in America, a movement predominantly supported by women. And Frances Willard, in her roles of leadership in so many important organizations, was a pillar of strength herself.

In 1899, the state of Illinois appropriated $9,000 for the creation of a statue memorializing Willard, still during the height of the political stances that she had been so passionate about; temperance and Christianity were hot political topics. The artist selected for the project was also a woman: Helen Farnsworth Mears. While Illinois’s choice to select the first-ever female subject for the National Statuary Hall Collection may appear forward-thinking, in reality the choice reflects many sentiments of the time—she was hailed as the state’s “uncrowned queen of purity and temperance” who was “devoted to the spiritual welfare of mankind” and whose “gentleness, tact, and self-sacrificing spirit calmed every storm that arose in the councils that were graced and blessed by her presence.” (Statue of Miss Frances E. Willard: Proceedings in the Senate and House of Representatives on the Occasion of the Reception and Acceptance of the Statue from the State of Illinois, pp 60-61) In short, while she was a powerful force for political change, Willard’s most lasting personal accolades still belong to the category of idealized motherhood and wifedom that colored the late nineteenth century.

For more on the National Statuary Hall Collection, visit the Architect of the Capitol’s website.