Two weeks ago I received a message from Karen Miles that she wished to donate several items to the U.S. Capitol Historical Society. The items included an original 1857 desk from the House of Representatives Chamber, a full-size study drawing by muralist Allyn Cox for one of the scenes in the Great Experiment Hall mural in the House wing of the Capitol, several prints and photographs, and a collection of books about the Capitol and Washington, D.C. Karen had worked in the Art and Reference Division of the Architect of the Capitol’s office in the 1960s and 1970s, and she and her husband had collected these items over the years. 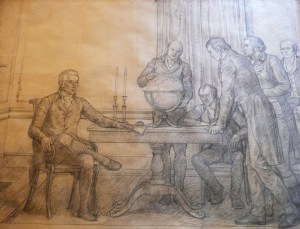 Last week, my colleague Randy Groves and I headed out in the company’s panel van to Karen’s home in Dunkirk, Maryland to collect the donation. We felt like kids on a treasure hunt as she showed us the various items and we carefully packed them up for transport. Once back at the office I began to examine the prints and photographs in order to catalog the collection.

Most items were easy to identify, but one large photoprint initially puzzled me. It showed a turn of the twentieth century crowd outside the Library of Congress building. Looking closer at the crowd, I could distinctly see Theodore Roosevelt addressing the audience. To make a long story short, it turned out that the event was the laying of the cornerstone for the House Office Building (now named the Cannon House Office Building) on April 14, 1906. The print was made from one of the large glass plate negatives in the collection of the Architect of the Capitol. 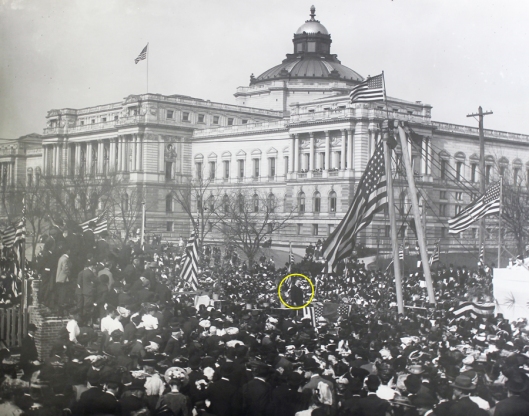 Photograph of the cornerstone laying ceremony for the House Office Building in 1906. Print from glass plate negative in the collection of the Architect of the Capitol. Gift of Karen Duffy Miles 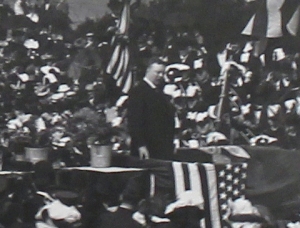 Close-up view of Theodore Roosevelt at the cornerstone ceremony

The photograph provides dramatic visual documentation of the event. You can clearly see Roosevelt delivering his speech (more of that later), the masons dressed with their aprons ready to lay the cornerstone, military and naval dignitaries, and the nattily attired crowd (note the variety of hats of the gentlemen and ladies—my colleague Lauren Borchard is preparing a forthcoming blog entry about the hats).

President Roosevelt seized the opportunity of the cornerstone ceremony to issue a prescient warning against the potential for the crusading journalism of the Progressive Era to descend into indiscriminate mudslinging. In the process, he coined a new term in American discourse: “muckracking.” Although he did not use that exact term, he likened the reform minded journalists and writers to John Bunyan’s “Man with the Muck Rake” in Pilgrim’s Progress, “the man who could look no way but downward, with the muck rake in his hand; who was offered a celestial crown for his muck rake, but who would neither look up nor regard the crown he was offered, but continued to rake to himself the filth of the floor.”

Roosevelt acknowledged the need for muckraking, but feared its excesses:

“Hysterical sensationalism is the poorest weapon wherewith to fight for lasting righteousness. The men who with stern sobriety and truth assail the many evils of our time, whether in the public press, or in magazines, or in books, are the leaders and allies of all engaged in the work for social and political betterment. But if they give good reason for distrust of what they say, if they chill the ardor of those who demand truth as a primary virtue, they thereby betray the good cause and play into the hands of the very men against whom they are nominally at war.”

He ended the speech with the timeless reminder that in a representative democracy: “The foundation stone of national life is, and ever must be, the high individual character of the average citizen.”

You can read the full text of TR’s speech here.

For more about the cornerstone ceremony and the House Office Building, see: