While doing some Tweet-of-the-Day research that didn’t pan out, I came across a terrific cultural artifact. 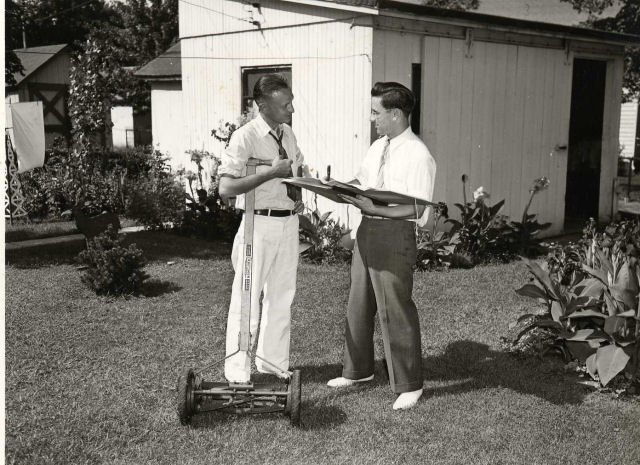 Original caption: “A homeowner takes a break from cutting the grass to be interviewed for the 1950 census.” (Census Bureau)

There are so many incredible details in this picture, which presents a specific image of 1950 that reminds us that the stereotypes we traffic in about the past have some basis in reality–or at least in a reality that was attractive at the time and not just now. It must be a publicity photo; the flora suggests a California location.

Now look again–the man on the left has supposedly been mowing the lawn. In dress pants, a button-down, and a tie! And the man on the right is walking door-to-door in a similar outfit, including white shoes. Check out the now retro-cool lawnmower, and note the laundry hanging out in the upper left corner. (Now there’s a detail that suggests a setting that wasn’t fabricated.)

What would an analogous PR piece look like today? Well, here’s a poster from the 2010 census.

It’s looking outdated already, in its own way.

OK, two more from the 1950 census, with captions from the Census Bureau. Then I’ll stop.

“An enumerator interviews President Truman and the first family for the 1950 census.” (Census Bureau)

“An enumerator collects information from a mother while her son ‘supervises’ the progress of the interview.” (Census Bureau)

There’s a series of image galleries for each census year on the Census Bureau’s history pages. Enjoy!