Bruce was elected to the Senate by a Reconstruction-era Mississippi legislature in 1874, after a quick rise through different roles in local and regional governing bodies. He had been born into slavery in Virginia in 1841 and was a personal servant to his half-brother, alongside whom he learned to read. He escaped during the Civil War and, after a stint working as a porter on the Mississippi, became a successful planter along the river’s banks. 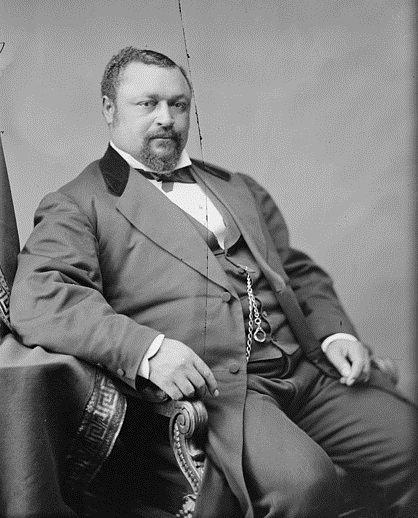 By the time he arrived in Washington in 1875, Bruce was a well-known politician in Mississippi and well-off compared to most of his black constituents. Throughout his time in public service, he walked a fine line in trying to please both white and black supporters, not to mention different factions of the Republican Party.

Bruce waited a year before speaking out in the Senate, similar to the period many other new senators waited. His clearest support for blacks related to issues affecting black veterans, but he also argued against the Chinese Exclusion Act and criticized federal actions regarding to Native Americans. However, neither white conservatives nor black constituents seemed convinced that Bruce was doing enough, or well enough, to continue in the Senate, and Bruce did not run for a second term in 1880.

After his Senate career, Bruce served in several capacities in the Republican party and was mentioned as a possible candidate for federal positions, including Cabinet positions and ambassador to Brazil. (He turned down the later because slavery was still legal in Brazil.) He held positions in DC as register of the U.S. Treasury and as DC’s recorder of deeds as well as serving on the board of trustees for Howard University.

Bruce died of complications from diabetes on March 17, 1898 in Washington, DC. In October 1999, the Senate Commission on Art approved the commission of a painting of Bruce for the Senate collection. Artist Simmie Knox relied on a Mathew Brady photograph of Bruce to guide the work, which now hangs in the Senate wing of the Capitol.

To learn more about early black Members of Congress, Blanche K. Bruce, or his portrait, join USCHS for the panel on February 17, 2016.

Sources:
Black Americans in Congress, 1870-2007. (Washington, DC: 2008) Editor-in-Chief Matthew Wasniewski, now Historian of the House, is one of our panelists. Most of the information in this post is drawn from the entry on Blanche K. Bruce.