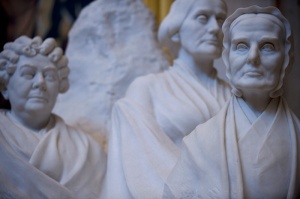 Close-up of the Portrait Monument to Lucretia Mott, Elizabeth Cady Stanton, and Susan B. Anthony, by Adelaide Johnson (1920) (Courtesy Architect of the Capitol)

With these words, Sara Bard Field both presented sculptor Adelaide Johnson’s suffrage monument to Congress and connected the struggle for women’s suffrage to past and future battles for equality and freedom in the United States. It was February 1921, and the National Woman’s Party (NWP) was about to decide whether it should go on as a party and what causes it would take up should its members vote to continue. First, however, Alice Paul and other NWP leaders, who understood so well the power of symbols and images, dedicated a monument to “the three pioneer suffragists” and presented it to the people of the United States via Congress for display at the Capitol.

On February 15, Susan B. Anthony’s birthday and the eve of the NWP convention, women’s organizations and suffrage supporters attended a grand pageant in the Rotunda. The Washington Post snidely remarked the next day that “the suffrage forces captured the Capitol last night without firing a shot.” However, another attendee noted that “the monument itself is everything beautiful,” while a third compared “seeing the monument to the great three” in the Capitol to the Trojan horse entering Troy. The evening’s proceedings clearly were interpreted as part of suffragists’ recently victorious struggles to gain a full voice in the national political life, a citizen’s place in the Capitol.

Although the ceremony seemed to run smoothly and impressed many, its organizers had worked frantically through January and February to make sure the event would definitely happen. One of the biggest obstacles, and one of the last to be resolved, came from Congress itself: would they accept the memorial, and would they allow its placement in the Rotunda? Assisted by committee member Sen. Frank B. Brandegee, Dora Lewis, Anita Pollitzer, and other NWP representatives lobbied the Joint Committee on the Library to accept the statues on behalf of Congress and to decide their permanent location after the ceremony. This way, the statues would belong to Congress and the presentation could take place on February 15, even though the monument would be moved to the Crypt one level below the Rotunda the next day with its permanent location yet to be decided. After members had an opportunity to view the statue, the committee agreed to accept the “marble portrait busts” on February 10, just five days before the dedication. Lewis, as Chairman of the Committee on Presentation of Statues to the Capitol, also visited the wives and daughters of prominent politicians to ask for their support, with great success: nearly every cabinet member had a family member join the committee, and Mrs. Harding, wife of the president-elect, also agreed to join.

Some of the women’s groups posed for pictures at the gala opening; note the banners each group has. (Courtesy National Museum of American History, Smithsonian Institution)

While the negotiations with Congress played out, numerous other issues arose. For instance, the NWP initially made arrangements to store the monument at artist Paul Bartlett’s D.C. studio. Adelaide Johnson and her work arrived in New York from Italy on January 21, and she shipped the monument to Washington on January 26. In the interim, Bartlett learned of its large size and weight and asked the NWP to store it elsewhere. By the time the statue arrived in Washington, the NWP had managed to arrange to bring it directly to the Capitol grounds and then into the rotunda.

The details of the ceremony provided additional sticking points. Alice Paul and other NWP leaders debated the merits of different opening speakers and eventually chose Sara Bard Field, a well-known suffrage campaigner, to give the main address presenting the monument to Congress. Marie Moore Forrest, Director of Drama and Pageantry for the District of Columbia Community Service, and Hazel MacKaye, who had been organizing pageants for the NWP since 1913, organized the pageant itself. They recruited nearly seventy organizations as well as descendants of the depicted leaders to process and to lay flowers at the foot of the monument, rented and distributed the capes each woman would wear, found three women to represent each group, and collected or had made a banner for each of the organizations. The U. S. Marine Band and a chorus accompanied several sections of the ceremony. 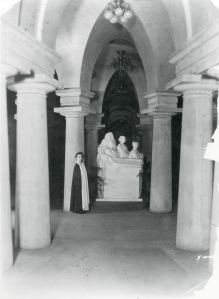 Sculptor Adelaide Johnson poses with her work shortly after it was moved to the Crypt. (Courtesy National Museum of American History, Smithsonian Institution)

The ceremony did come off beautifully, to the pleasure of all involved. Though the monument moved to the Crypt the next day, NWP leaders did not yet view the location as completely problematic as the Architect of the Capitol was suggesting using the crypt to display all the statues in the Capitol at the time. The convention was off to a dramatic, moving start. Most importantly, Congress and the Capitol now had a permanent tribute to some of the women who began the fight for women’s suffrage, and it had been installed with all desired pomp and circumstance. Women’s right to vote had only been ratified the previous summer, and the ceremony provided a platform to celebrate the victory. Women had entered the Capitol as citizens literally and symbolically.

Source:
The Records of the National Woman’s Party, Library of Congress