The U.S. Capitol Dome has defined the Washington, D.C. skyline for almost 200 years.  Inside the Dome is the Rotunda, a room that inspires all who step inside whether you are visiting for the first time or have worked in the Capitol for years.  It is hard to comprehend the size and scope of this incredible architectural structure and the historical significance of the rotunda, so we wanted to lay out a few numbers for you to get a better idea of its magnitude, both physically and historically:

3-5 million and growing: the number of visitors to the U.S. Capitol building and Rotunda each year

288 feet: height from East Front ground to top of Statue of Freedom on the Dome

180: number of windows in the Dome

365: number of steps to take the staircase from the Capitol basement to top of the Dome

48 feet: height of original sandstone walls inside Rotunda (everything above was added after 1855) 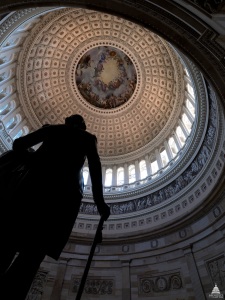 The Capitol Rotunda (Architect of the Capitol)

$40,000: cost to create the Apotheosis of George Washington fresco by Constantino Brumidi

32: the number of individuals who have lain in state or in honor in the U.S. Capitol Rotunda – the first was Henry Clay on July 1, 1852 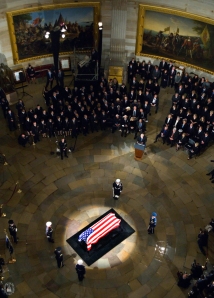 President Ford lying in state (Architect of the Capitol)

1: the number of presidential inaugurations that took place in the Rotunda (Pres. Reagan’s 2nd Inauguration was on Monday, January 21, 1985 and was moved indoors from the West Front of the Capitol when the weather was predicted to reach a high of 7 degrees, with a wind chill of -20 degrees.  It remains the coldest inauguration on record).

1 thought on “Dome by the Numbers”