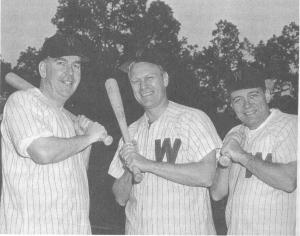 Rep. Glenn Davis, right, and Gerald Ford, center, with a third member of the Republican baseball team, probably in the mid-1950s.

Reading the baseball article in the latest issue of our history magazine/newsletter, The Capitol Dome, USCHS staffer Steve Livengood was reminded of the story told by former President Gerald Ford at the memorial service for the late congressman from Wisconsin, Glenn Davis. Davis had been a semi-pro baseball player before he was elected to Congress in 1947, and he took his baseball as seriously as he took his politics.  He even had the first home run ever hit by a member of Congress out of the new DC Stadium (now called RFK Stadium). Because of his expertise, Glenn often coached the Republican team. Ford characterized Glenn’s personality with this anecdote: one year when Ford was Minority Leader of the House, before he became vice president, he had been too busy to practice with the Republican team. Ford nonetheless suited up for the game, but Glenn was a stickler for the rules; since Jerry had not shown up for practice, Glenn would not let him play in the game, even though he was the minority leader.

See what memories our newsletter brings up for you. This issue also includes articles on the Capitol during the Civil War, stained glass windows in the Capitol, and a Congressional letter from 1800, as well as a review of USCHS events. Find the online version here, where you can also download a pdf of the Dome.